Summary of the origins of St Michaels’ Village Hall 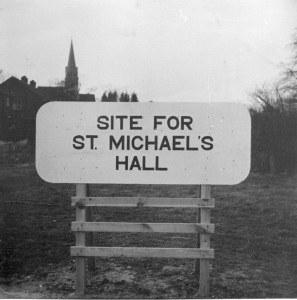 (Abstracted from details written by George Freeland – October 1987)
George Freeland who was vice chairman of the Hayseeds Dancing Club was looking for a large enough hall to accommodate his club. All the numerous St Michaels organisations responded favourably to the suggestion of a new hall in St Michaels. This was the start of fifteen years of fund raising and struggling with bureaucracy.

The then Tenterden Mayor, Stanley Day, called a public meeting in the Town Hall and got a representative from the Ministry of Social Services to come and tell them what the project entailed and what help the Government would give and Mr Freeland was appointed to run the effort.

Sites considered by Mr Freeland were, the corner site now occupied by the Fire Station, the corner site at Shoreham Lane, sites at Wayside, Heather Drive, and Grange Crescent before any development had been started. The only site offered by the council was the Pond Site (Marshals Land) which was originally turned down because of the extra foundation costs.

After many frustrating months with no co-operation from the Council, a Public Meeting was called to reconsider the Pond Site previously offered for the sum of £50. Finally, despite the extra estimated cost of about £200, it was agreed to purchase the site for the asking price of £50. The decision to purchase was made!

The Ministry’s Trust deed was signed, making the project a Charity thus authorising the committee to raise funds and entitling them to the grant of £1 for every pound that was raised as public trustees. Once the position was legalised, the fund raising really began.

Whist Drives, Coffee Mornings, Bridge Drives, Concerts etc. For twelve years Gymkhanas were held on the first Saturday of each September and a Fete every Whitsun. Also marmalade was made and sold locally! The Mayor, Major Chalk, arranged a whole week of events in support. A profit of £700. On the week was made.

By 1963 there was £2,500. in the building fund, add to this the ministry grant making a total of £5,000. and a decision was made to start the building, anticipating more public support when it was seen to be actually taking place.

The plans were drawn up by Peter Luckett and approved by the Ministry. They were then submitted to the Kent County Council and Tenterden Town Council, both of whom approved, and building started.

We continued to raise money by every means possible. After much ‘discussion’ and negotiation
A grant of £3,000 was given, interest free, over a repayment period of fifteen years by Tenterden Town Council. Tenterden had a War Memorial Fund unused since the war ended which was eventually divided equally between Tenterden and St Michaels

As with all village halls, rate relief of 50% was given when the Hall was eventually built. This was in 1967. The grand piano was given by Mrs Reece, broadcasting equipment for use at the Gymkhanas was purchased for the sum of £41.13s.0d and the first years bookings amounted to £560.

Mr Freeman gave three flowering cherry trees, three conifers and some flowering shrubs for ground cover for the front of the hall. As there was no kerb along the front, cars were always parking on the frontage, to the decimation of the trees. The Committee decided that six feet of the frontage should be offered for a footpath if the County Council would build a low retaining wall. Again after negotiation the wall was built and the pathway made, This was in 1970.

When Ashford Council took over Tenterden, they made the hall rate free. This was later reinstated at the previous rate.

Today the Hall is air-conditioned, double glazed and boasts a sprung floor. It is one of the largest in Kent and finest regarding capacity and amenities. The Hall is fully booked but will always endeavour to accommodate any new hirers.

This was all achieved by a dedicated and tireless Committee, with a hundred per cent support from local organisations.

16th April 1956 A Public Meeting was held at St Michaels School when it was decided to accept the Pond Site in Grange Road . – no papers found for this meeting.

The committee was formed when the site had been earmarked and its aim was to raise funds for buying the site and building the hall. The first meeting was held in St Michaels Post Office Stores on Tuesday 19th June 1956.

The officers elected were Chairman: G.E Freeland, Vice Chairman:P Hukins Hon.Secretary: R F Champion, Publicity Manager: E.H Belcher. Hon Treasurer: Mr Abbott ( elected in his absence subject to his agreeing). Other people attending this first meeting were: Miss Newnham , R H Coombs, A J Jarvis, and F Russell. It was agreed at this meeting to ask an architect to survey the site, to register the proposed hall with The Council for Social Services, to form a social committee and to open a bank account for the Hall.

The Second Committee Meeting on 3rd October 1956, clarified the Council for Social Services role of issuing a £ for £ grant on any money raised locally, and reported concerns that the hall might be subject to subsidence if built on ‘made up’ land.It was decided to ask the Borough Council that in view of the architects report, would it be possible to have a different piece of land. i.e. The allotment site behind Marshalls Land.

Third Committee Meeting held on 20th February 1957. Mrs Creek only new member. Only page one of notes exists, and it seems that in view of subsidence concerns and possibility of the allotment site ( now the school playing field ) a further public meeting should be held.

Public Meeting held on 22nd July 1957 at St Michaels School. Approximately 50 members of the public attended. The problems of the proposed Pond Site were discussed, three architects reports now having been obtained, the extra costs for foundations on this site would be anything up to £1000. Tenterden Council were reluctant to release the allotment site as it may be needed for future housing!! In view of the fact that it was 4 years since the hall was first proposed, a vote was taken to see if the Public still wanted one. The vote was only 1 against.

24th February 1960 meeting held at St Michaels Post Office. Present were G Freeland, F foreman, R coombes, W D Hukins, A J Jarvis, H F Abott, W Russell, Mrs Creek, Lady Gordon and Miss B Wightwick. This meeting was mostly concerned with the organisation of the forthcoming fete, to be held on 6th June in the St Michaels recreation ground. Mr Jimmy Edwards was to be approached to ask if he would open the fete. (Is this the famous one? Or a local Mr Edwards). Fund raising so far this year had raised £120.10s.6d

Attending this meeting on 13th April 1961 were Chairman: G freeland, Treasurer: Mr Hammond, Secretary: Mrs M Melville-Cross, V Perry, Lady Gordon, Mrs Watts, K.Jessup, P.Major, P Hukins, R. Faulkener, P Withers, A Jarvis, D Russell. The Tenterden Borough Memorial fund put its proposals forward for the disposal of this fund. It was agreed by this committee for the money to be divided equally between Tenterden and St Michaels. The rest of the meeting was arranging the Whit Monday Fete to be held on 22 May. 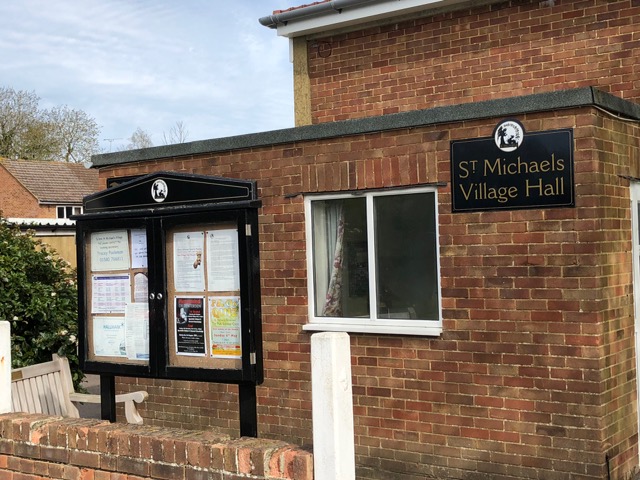